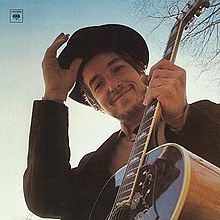 NASHVILLE SKYLINE is the ninth studio album by Bob Dylan, released on April 9, 1969, by Columbia Records as LP record, reel to reel tape and audio cassette.
Building on the rustic style he experimented with on JOHN WESLEY HARDING, NASHVILLE SKYLINE displayed a complete immersion into country music. Along with the more basic lyrical themes, simple songwriting structures, and charming domestic feel, it introduced audiences to a radically new singing voice from Dylan, -who had temporarily quit smoking- a soft, affected country croon.
The result received a generally positive reaction from critics, and was a commercial success. Reaching number 3 in the U.S., the album also scored Dylan his fourth UK No. 1 album.


Below are the songbooks, copyright Big Sky Music, published in 1969. Thank you to Peter Oudejans for the scans from his collection.


The Dutch songsbooks below were published by Schaltone Music Publishers / Productions, first established at Heemstede, then at Haarlem. There are variants in colour and types of paper used for the cover. Different sequence from the album, minus Girl From The North Country, plus I Shall Be Released. 28 pages.
This is 'Album 3' of a series of 4; see others: 1. BLONDE ON BLONDE, 2. JOHN WESLEY HARDING, and 4. SELF PORTRAIT. Thank you to Peter Oudejans and Tom Willems for the scans and information.