BLOOD ON THE TRACKS 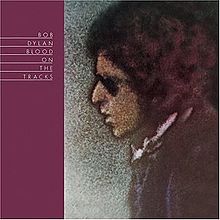 BLOOD ON THE TRACKS is the fifteenth studio album by Bob Dylan, released on January 20, 1975 by Columbia Records. The album marked Dylan's return to Columbia Records after a two-album stint with Asylum Records. Dylan commenced recording the album in New York City in September 1974.
In December, shortly before Columbia was due to release the record, Dylan abruptly re-recorded much of the material in a studio in Minneapolis. The final album contains five tracks from New York and five from Minneapolis.


Below are the songbooks, copyright Ram's Horn Music.
They include all the songs of the album: Tangled Up In Blue, Simple Twist Of Fate, You're A Big Girl Now, Idiot Wind, You're Gonna Make Me Lonesome When You Go, Meet Me In The Morning, Lily, Rosemary And The Jack Of Hearts, If You See Her, Say Hello, Shelter From The Storm and Buckets Of Rain.