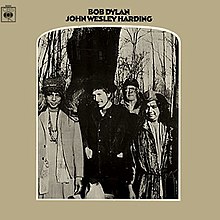 JOHN WESLEY HARDING is the eighth studio album by Bob Dylan, released on December 27, 1967 by Columbia Records. Produced by Bob Johnston, the album marked Dylan's return to acoustic music and traditional roots, after three albums of electric rock music.
JOHN WESLEY HARDING shares many stylistic threads with, and was recorded around the same time as, the prolific series of home recording sessions with the Band, partly released in 1975 as THE BASEMENT TAPES, and released in complete form in 2014 as THE BOOTLEG SERIES VOL. 11: THE BASEMENT TAPES COMPLETE.


Below: The songbooks, Dwarf Music copyright, music and lyrics of 12 songs, published in 1968 by Bob Dylan Words and Music Co. Inc.
The US and UK editions include a full-page essay, "The Return of Bob Dylan", by Alfred G. Aronowitz, a two-page essay, "His Best Yet", by Gordon Mills from Rolling Stone and a full-page piece, "John Wesley Harding", written by Bob Dylan.


The Dutch songsbooks below were published by Schaltone Music Publishers / Productions, first established at Heemstede, then at Haarlem. There are different adresses on the front covers, variants on the front cover and different back covers. 20 pages.
This is 'Album 2' of a series of 4; see others: 1. BLONDE ON BLONDE, 3. NASHVILLE SKYLINE, and 4. SELF PORTRAIT. Thank you to Peter Oudejans and Tom Willems for the scans and information.