ANOTHER SIDE OF BOB DYLAN 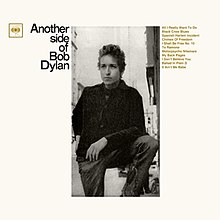 ANOTHER SIDE OF BOB DYLAN is the fourth studio album, released on August 8, 1964 by Columbia Records. The album deviates from the more socially conscious style which Dylan had developed with his previous LP, THE TIMES THEY ARE A-CHANGIN'. The change prompted criticism from some influential figures in the folk community: SING OUT! editor Irwin Silber complained that Dylan had "somehow lost touch with people" and was caught up in "the paraphernalia of fame".

Below are the songbooks of the album, copyright M. Witmark & Sons: it is to be noted that they omit I Shall Be Free No. 10. They must not to be confused with the compilations having the same title.