BRINGING IT ALL BACK HOME 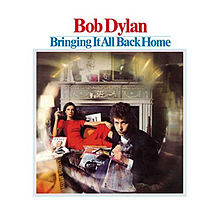 BRINGING IT ALL BACK HOME is the fifth studio album by Bob Dylan, released on March 22, 1965 by Columbia Records.
The album is divided into an electric and an acoustic side, although the acoustic side included some tracks in which other instruments were backing up Dylan and his guitar, but no drums were used.
On side one of the original LP, Dylan is backed by an electric rock and roll banda move that further alienated him from some of his former peers in the folk music community. Likewise, on the acoustic second side of the album, he distanced himself from the protest songs with which he had become closely identified, as his lyrics continued their trend towards the abstract and personal.


Below are the songbooks, copyright M. Witmark & Sons, N.Y., with piano arrangements by Jerry Sears. They all have 32 pages Thank you to Peter Oudejans for the information.