Dylan enthusiasts will know the name Rare Cool Stuff Unltd from THE BOOTLEG SERIES and other major Dylan projects. Geoff Gans and partner Gary Gonzales co-founded the company in 2008 and one of their first collaborations was on the Dylan hardback book “THE COLLECTED SINGLE SLEEVES” for TELL TALE SIGNS – BS8. Other Rare Cool Stuff items include the very collectable 2011 Limited Edition Ken Regan photobook published by Morrison Hotel Gallery.
Some Rare Cool Stuff projects are private custom editions that are not available to the public. As Geoff Gans puts it, “They’re so rare and cool, no one else can get them.” One such printing was BOB DYLAN DRAWN BLANK SERIES - A PRIVATE COLLECTION. This rare edition book features all the images exhibited in the “Drawn Blank Series” collection as first seen in Chemnitz, Germany in 2007-08.
Collectors Diane and Mickey Gooch bought the entire signed edition of 92 original works as an investment and obtained Bob Dylan’s permission to make a limited edition book for their personal use and to share with close friends. It was released on March 13, 2010 by Rare Cool Stuff in an edition of just 100 hand-numbered copies signed “Mickey” by Mickey Gooch. The edition was not commercially available and is highly sought after by Dylan collectors.
As with all Rare Cool Stuff Unltd items, this book is beautifully produced and printed. Large Format, it measures 27 x 33cm and is bound in Red Cloth with Gold Endpapers. The inside pages are printed on card and are single-sided." Information bobdylanisis.com

Below: Rare Cool Stuff 2010, private publication of 100 numbered copies. 96 pages with 92 full page reproductions of a private collection of the original artwork. 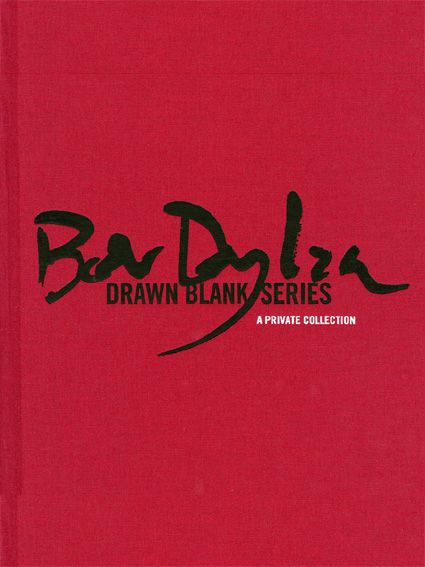