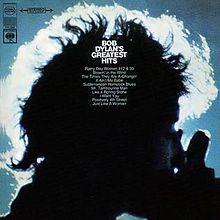 BOB DYLAN'S GREATEST HITS is the first compilation album by Bob Dylan, released on March 27, 1967 on Columbia Records, original catalogue number KCS 9463. It contains every Top 40 single Dylan enjoyed through 1967.
The 10 songs of the album are: Rainy Day Women #12 & 35, Blowin' In The Wind, The Times They Are A-Changin', It Ain't Me, Babe, Like A Rolling Stone, Mr Tambourine Man, Subterranean Homesick Blues, I Want You, Positively 4th Street and Just Like A Woman


The items below, though they have the same title and use the same photo by Roland Scherman as the 1967 compilation LP, feature a different selection of songs, and are therefore NOT the songbooks of the album.
The 12 songs of the songbook are: Blowin' In The Wind, The Times They Are A-Changin', It Ain't Me Babe, Subterranean Homesick Blues, Mr Tambourine Man, Like A Rolling Stone, Positively 4th Street, Don't Think Twice It's All Right, A Hard Rain's A-Gonna Fall, Mama You Been On My Mind, All I Really Wanna Do and My Back Pages.