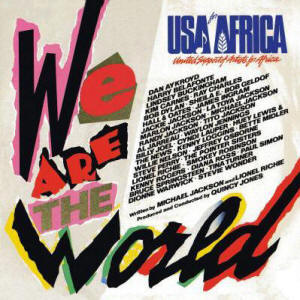 "We Are the World" is a song and charity single originally recorded by the supergroup United Support of Artists (USA) for Africa in 1985. It was written by Michael Jackson and Lionel Richie (with arrangements by Michael Omartian) and produced by Quincy Jones for the album We Are the World. With sales in excess of 20 million copies, it is one of the fewer than 30 all-time physical singles to have sold at least 10 million copies worldwide.

Below: We Are The World by USA For Africa. Song by Michael Jackson and Lionel Richie. Vocal melody, piano accompaniment, lyrics, chord names and guitar chord diagrams. 7 pages