I'M NOT THERE, by Todd Haynes

I'M NOT THERE is a 2007 biographical musical drama film directed by Todd Haynes and co-written with Oren Moverman, inspired by the life and music of American singer-songwriter Bob Dylan. Six actors depict different facets of Dylan's public personas: Christian Bale, Cate Blanchett, Marcus Carl Franklin, Richard Gere, Heath Ledger, and Ben Whishaw. A caption at the start of the film declares it to be "inspired by the music and the many lives of Bob Dylan"; this is the only mention of Dylan in the film apart from song credits, and his only appearance in it is concert footage from 1966 shown during the film's final moments.
The film tells its story using non-traditional narrative techniques, intercutting the storylines of seven different Dylan-inspired characters. The title of the film is taken from the 1967 Dylan Basement Tape recording of "I'm Not There", a song that had not been officially released until it appeared on the film's soundtrack album.
The film received a generally favorable response, and appeared on several top ten films lists for 2007, topping the lists for The Village Voice, Entertainment Weekly, Salon and The Boston Globe. Particular praise went to Cate Blanchett for her performance, culminating in a Volpi Cup for Best Actress from the Venice Film Festival, the Golden Globe Award for Best Supporting Actress, along with an Academy Award for Best Supporting Actress nomination. 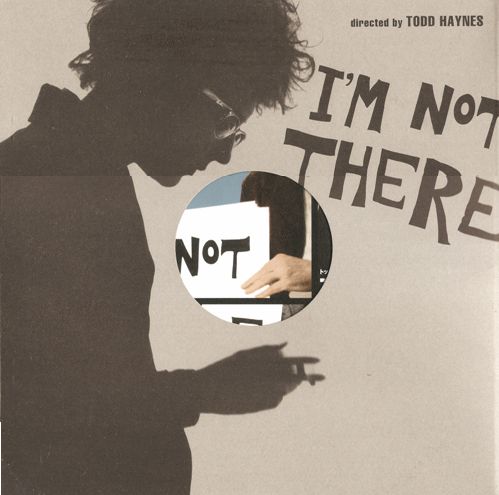 Japan PROMO ONLY cinema book, only sent out to cinemas to promote the cinema release of the film. The book is 25 cm x 25 cm and is printed in full colour, with 24 pages and a die-cut front cover. Most of the pages are about the film, with the actors who play Bob Dylan - but there is also a picture discography page, so Bob Dylan is included too! Thanks to Wil Gielen for the scan and info.