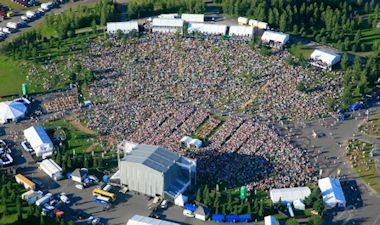 Kirjurinluoto is an island and a park in the delta of Kokemäenjoki river in the city of Pori in Finland. It is best known for the Kirjurinluoto Arena, an open-air concert park which hosts the annual Pori Jazz festival.


Bob Dylan performed on 21 July, the last day of the festival.


To Be Alone With You

All Along the Watchtower

Tangled Up in Blue

Ballad Of A Thin Man

It Ain't Me, Babe